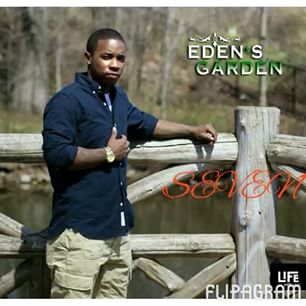 Gender Reel’s 2015 fall festival circuit kicks off September 30th in Boston and continues throughout the months of October and November in Minneapolis, Durham, Omaha and Houston.

This year, Gender Reel features 21 amazing films exploring a range of issues related to the trans and gender non-conforming experience, including premiere screenings of Eden’s Garden — a short film created by Filmmaker Seven King — which features an all trans male cast and focuses on socially relevant issues impacting black and Latino trans men.

Seven, is a 28-year-old, African- American, trans man director, writer, film producer, documentation, advocate and filmmaker born and raised in Bronx, New York. Over the past 10 years, Seven has wrote and produced many screenplays specializing in the drama genre.

Earlier this month, Gender Reel caught up with Seven for a short, yet personal interview. This is what he had to say about his work in the film industry, what he hopes his professional future will look like and what others can do to accomplish their dreams.

Joe: How long have you been making films?

Seven: I have been a visionary all my life. Art has been apart of my life since I was a child. Creativity is effortless for me. I embrace that part of me. Expressing myself in other ways that has to do with creating has always been my language. Film making is vision and a visionary, I am. I have been writing screen plays since I was a teenager. I have been making films since I was sixteen.

Joe: What inspired you to get into the film making industry?

Seven: I am inspired in putting different messages on the screen. We live in a world influenced highly by technology, I believe in creating films for the brain to think. I am about creating revolutionary films. I have a revolutionary spirit. I think outside the box and I can create a story regardless if I been through it or not, I believe in the power of the message. The power of the message is what inspired me to take on filmmaking.  I like to create impactful drama related films. I believe it’s tied to my journey. Life’s circumstances will take you to different experiences. An artist creates from different inspirations, I create from experience or exposing different conversations, topics and views that may have not been focused on before.

Joe: What makes the content and story line of Eden’s Garden a unique and important one?

Seven: I’m an artist. I am a visionary. I am a revolutionary at heart. I am also a transgender male. Expressing the story of my own personal experience which also represents the story of millions of transgender people, regardless of color is an intimate project to produce alone. I wrote an explicit, heart felt and honest show, regarding the trans male experience and I hope this show opens a window for the world to understand our realities and struggles through this scripted drama. I hope this show connects people, I hope this show brings respect to people who choose to transition and live their life as any other person. I hope it brings understanding and clarity to people who still have narrowed views of the transgender experience. I hope it helps people see the perspectives of some Black and Latino trans men.

Joe: As a trans man yourself, were there personal reasons or interests behind creatingEden’s Garden?

Seven: Personally, filmmaking is my career. I want to show the world when we create outside the box, the impact in energy it will send out in the air. Eden’s Garden is helping to open the minds, conversations and perspectives of people who may not be of trans experience. The connection of being human is what I personally wanted to put onto the forefront. I believe the personal is always political. It’s a political statement for me to call myself black and trans in the same sentence. It’s a statement of my somebody-ness. What it means to be black, trans and human. It is my radical subjectivity. I feel this series is personal, intentional and political. Throughout life we will experience all of the above. I’m intentionally bringing the story of trans men to the forefront for the media and world to see the visible face and story of human beings who also happen to be trans man.

Joe: If you could decide on one message someone watching Eden’s Garden could walk away with, what would that message be?

Seven: Being yourself is an action of choice you have to decide to live everyday. Be true to what you feel, think and want to be, that is the ultimate freedom.

Joe: What is in store for Seven King’s future? Are you planning more films? Projects?

Seven: I plan to expand my production company “Seven King Entertainment”  and produce films of different focuses, not just LGBT based. I am also in the middle of writing a book, there’s allot in store!

Joe: As a successful filmmaker, who is also trans and a person of color, do you have any advice to offer other young people who may be interested in getting involved in visual or media arts?

Seven: The advice I can give to people inspiring to be filmmakers is to have “tunnel vision” for your goal. Learn how to master starting and finishing something. Many people, have multiple ideas but do not know how to finish what they start. Believe in your idea and vision when no one else will. Learn that everything is a process and that nothing comes overnight. You will be so focused, by the time you look up, your goal will be accomplished.

You can catch Seven after the screenings of Eden’s Garden @ Gender Reel Boston on October 1st and Gender Reel Minneapolis on October 8th. During these events, he will participate in a short Q&A as well as larger panel discussions regarding issues impacting TMOC.

To find out more about all upcoming festivals please consult our 2015 Festivals and Co-sponsored events page for scheduling details.